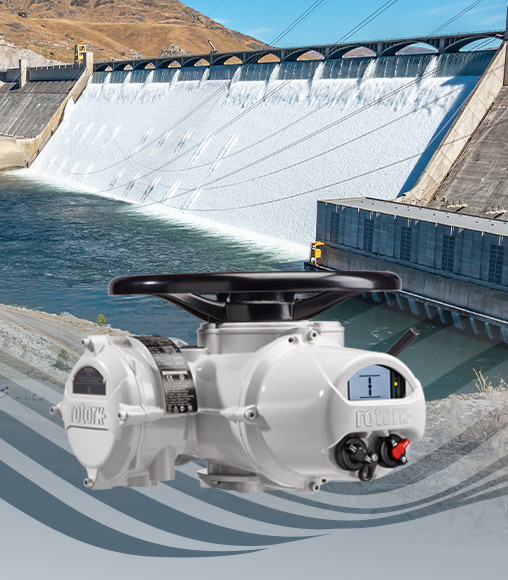 The Grand Coulee Dam Washington State, USA, is the largest producer of hydroelectric power in the United States. It is a gravity dam, with three hydroelectric power generating plants and a pump generating plant (which works to create energy from a back-up reservoir at a higher elevation when demand is high) which provide a total generating capacity of 6,809-megawatts. The site has a total of 33 hydroelectric generators. IQ actuators have been installed as part of an overhaul project to operate cone valves.

Over the past 20 years the US has embarked on building several green energy platforms; the rehabilitation of existing green energy power plants like the Grand Coulee Dam is an example of this. The third power plant at the Grand Coulee Dam is the newest plant on site, but over the last decade has been overhauled to ensure efficiency and long term, dependable service. This has meant the overhaul of six hydroelectric generators, plus turbines, shafts, and auxiliary equipment. In August 2020, it was renamed as the Nathaniel Washington Powerplant.

IQ actuators have been installed on site at the Nathaniel Washington Powerplant to operate cone valves, which allow precise control of water through penstock systems. The gradual opening of the valves, controlled by the IQ actuators, allow for penstocks to be gradually filled. The accurate control provided by the IQs is central in preventing “water hammer”, or hydraulic shock, which is a damaging pressure surge which occurs when a fluid stops or changes direction suddenly, especially when a valve closes too quickly. The huge amount of water being controlled at the Grand Coulee Dam means this is a genuine concern; precise and gradual control of valves by IQ actuators prevents any risk of pipe collapse or other damage.

The customer chose IQ actuators because of their automation, precise control, compact size and integral motor starters. IQ actuators offer robust absolute position sensors with high reliability and accuracy, an intuitive user interface and water ingress protection (they are double-sealed to IP66/68 at 20m for 10 days.) They are therefore watertight and suitable for use in hazardous areas, making them ideal for use within the overhaul of the Grand Coulee Dam.

Heyward Incorporated, Rotork’s Representative, managed this project to assist the customer in the overhaul of the Grand Coulee Dam.