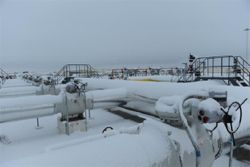 Over the course of several years, PetroChina have been carrying out the construction of the West-East Pipeline (WEPP) network, which connects the Chinese market with the western sources of natural gas. Rotork has been selected to play a central role in this development with the provision of many IQ range intelligent electric actuators and the IQM modulating actuators.

The WEPP network is described as the largest and most significant gas industry project ever planned in China. Intended for the development of the western regions in China, the project involves construction of four gas pipelines connecting the eastern markets of China with the western resources. Thousands of kilometres of pipelines travel along varied terrains such as plateaus, mountains, deserts and rivers to connect the Tarim Basin in Xinjiang Autonomous Region and Turkmenistan with the Yangtze Delta and Pearl Delta regions.

The pipeline project is being developed by PetroChina West-East Gas Pipeline Company, a subsidiary of PetroChina. The largest state-owned oil and gas producer China National Petroleum Corporation (CNPC) owns the majority stake in PetroChina. The first stage of this huge undertaking, (WEPP 1) which opened in 2004, brings natural gas from the Tarim Basin gas fields in Xinjiang to the Yangtze River Delta area for the production of electricity. In 2008 construction began on a second pipeline, in part running parallel to and interconnected with the first. The second pipeline runs from Xinjiang to Guangzhou and is being followed by two further pipeline developments, all designed to supply billions of cubic metres of gas to satisfy the burgeoning demand for energy in China’s industrial and population centres. Construction on the second pipeline (WEPP II) started in February 2008 and ground-breaking for the third pipeline (WEPP III) took place in October 2012. WEPP IV is still in the planning stage.

From the very beginning, electric valve actuation utilising Rotork IQ intelligent non-intrusive technology has been adopted throughout the project. For over a decade, thousands of these actuators have been installed during all stages of the project for valve control at compressor stations, manifolds and storage facilities.

In 2002, when construction of the first pipeline started, IQ intelligent valve technology had been in existence for nearly 10 years and was established in many industries. The first generation of IQ actuators had recently been superseded by IQ Mk2, adding new functionality that could not be found in the products of other manufacturers who were beginning to copy the original design.

At the time, Rotork was the only manufacturer to offer non-intrusive setting, commissioning with data logging and data transfer technologies in actuators that were already proven in the international oil and gas industries. The IQ actuator had pioneered non-intrusive data communication by means of an infrared link to a handheld setting tool when launched in 1993 and by 2000 the IQ was accounting for the majority of the company’s worldwide electric actuator sales.

By 2006 the non-intrusive technology had been further developed by the introduction of bidirectional communication between the actuator and setting tool, enabling actuator configuration data to be retrieved and re-transmitted to other actuators, with the potential to save immense amounts of time when many valves require near identical commissioning settings. The data can also be downloaded on to a PC, fine-tuned or adjusted and then re-transmitted via the handheld setting tool to the actuator.

Integral data loggers in each actuator record the commissioning data ‘footprint’ and subsequent valve operating information, including the torque profiles in both valve directions.  Extraction and analysis of this data on a PC running Rotork IQ Insight software enables the accurate evaluation of valve performance and the identification of potential operational issues. Asset management programmes can then be planned with greater efficiency, eliminating the temptation to plan for over-cautious maintenance schedules. The risk of unexpected process interruptions is also minimised. Data can be downloaded by the handheld setting tool or with a laptop running the software directly linked to the actuator.

In addition to pipeline isolating valve duties, intelligent electric actuators are also utilised for control valve duties at take-off stations that enable the gas to be transferred at a reduced pressure to downstream distribution networks.

In this example, IQM modulating actuators control axial flow control valves in sizes between 100 mm and 250 mm. These Class 600 valves are described as the critical “first in line” valves that reduce gas pressure from the main transmission line operating pressure of up to 99 bar to the downstream distribution pressure of 25 to 45 bar. On the first pipeline alone more than 50 of these take-off stations were built along the route. (Courtesy Mokveld Valves.)

Commissioning actuators non-intrusively, without removing electrical covers to set end of travel switches and torque settings, offered the operators many benefits. As well as improving the efficiency of the commissioning process, the technique ensured that internal electronic components were permanently protected from the possibility of contamination by moisture or dust, securing long term reliability in the environmentally challenging conditions prevalent along the pipeline route. The technology is further enhanced by a ‘double-sealed’ terminal compartment for wiring up the power and control cables. Terminals are separately sealed from the main body of the actuator to ensure that internal electrics are protected when the terminal cover is removed. As a result, actuators with the highest certification for hazardous area operation also feature a robust, watertight and temporarily submersible enclosure approved to IP68 and the equivalent international standards.

Construction of the third pipeline, which has similar statistics to pipeline two, is now underway and from the beginning of 2013 orders for this project are being fulfilled with another new generation of IQ actuation technology, designated IQ3. Experience and feedback from projects such as the first two West-East Pipelines has made a vital contribution to Rotork’s ability to introduce more functionality and asset management features that dovetail seamlessly into existing installations and control protocols. Further advances to data logging, display and communication capabilities have been introduced in response to the recognised desire from end users to access even more data, both in the field and in the control room.

Included in the list of developments, there are three key features of the IQ3 design that are particularly important for long term reliability, low maintenance and low cost of ownership.

First, the actuator local position indicator window has developed into a multi-functional display capable of providing local indication, valve and actuator status, menu screens for configuring and setting up the actuator, fault diagnostics and asset management information. What was once just a local position indicator is now a window to the plant process. In addition to local position indication it also provides a graphic interface to assist set up and calibration and it displays – at the valve – critical performance data in relationship to actuator performance that allows a user to determine the service condition of the valve or predict when a problem may occur.

The display itself has been designed as a double display with a very wide viewing angle. The front segment display enables the actuator to be fully set up and operated, whilst the second enables detailed diagnostic and operating data screens to be permanently displayed, delivering the ‘view of the process’. Four selectable screens are available, depending on the information that the operator wishes to see at all times, including diagnostic graphics, simultaneous demand and position, torque and position and actuator settings. Valve position is displayed to one decimal point, offering accuracy and resolution for diagnostic analysis. Diagnostic graphics offer a window into the process showing the valve torque graph and facilitating analysis of the situation in real-time.

Second, the accurate measurement of the actuator output torque is a function provided by the worm and wheel. The axial force of the worm shaft is always proportional to the torque produced by the worm wheel and this is not affected by changes in the efficiency of the gearing caused by long-term operation. The torque is measured by a force transducer rather than disc springs or any other mechanical devices that can wear and change their characteristics over time. This is very important for asset management, as the torque profile of the valve operating stroke is recorded by the actuator data logger as a ‘footprint’ during commissioning and subsequently recorded during every valve operation. This data forms a crucial part of the information that can be used for maintenance planning.

Third, reliable and sustainable valve control relies on accurate and repeatable position measurement by the actuator. To achieve this, the IQ3 now uses a patented absolute encoder. Absolute encoders are electro-mechanical position measurement devices that sense the relative positions of driven gears to calculate the position of the actuator output and therefore the valve position. Their advantage is that they require no power to track the position change; their disadvantage is that they add complexity and can reduce reliability.

Using the latest technology and after several years of testing, the IQ absolute encoder overcomes these problems. It is contactless, with only four moving parts and can measure up to 8,000 output turns with high resolution, redundancy and self-checking. The design increases position sensing reliability whilst providing position measurement with or without power connected.