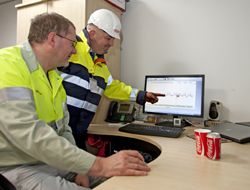 CCE has invested over £100 million over the last five years at the Wakefield site, which is the largest soft drinks production plant in Europe, as part of a long term programme highlighting its commitment to local manufacturing and the development of new technologies. Since installing and acting on the information produced by an Energy Monitoring system, the company has so-far reduced electricity consumption at Wakefield by 13% since 2009.

An important part of the plan involves saving the on-going cost of providing and maintaining an instrument air supply for traditional pneumatic control valve actuation. This is being implemented at Wakefield by the introduction of the Rotork CVA control valve actuator to perform modulating and fail-safe valve duties.

Prior to the introduction of the CVA, the modulating performance of electric actuators could not match the performance of pneumatic control valves. CVA actuators have introduced continuous, repeatable modulating electrical control with a programmable fail-to-position option. Operating on an industry standard 4-20 mA control signal or digital network, the resolution, repeatability and hysteresis performance is quoted at <0.1% of full scale, offering suitability for the most demanding applications.

Mechanical features include Rotork’s well-proven double-sealed enclosure, which permanently protects internal electrical components from the effects of the operating atmosphere. The IP68 dust-tight, watertight and temporarily submersible enclosure is universal to all models in the CVA range, including those with hazardous area approvals. On loss of mains power, built-in super-capacitors allow the actuator to move the valve to a desired position, programmable as open, close, any intermediate position or stayput.

CVA actuators utilise Rotork’s innovative and well established ‘non-intrusive’ communication technology for actuator programming and adjustment. Actuator set-up and configuration is performed using a Bluetooth® enabled PDA or PC running Rotork Enlight software. Every CVA incorporates an onboard data logger, enabling operational data such as valve torque profiles, dwell times, actuator events and statistics to be downloaded for detailed investigation and diagnosis. After analysis, any required configuration changes can be uploaded into to the actuator.

Digital control network options include HART, Modbus and Profibus protocols, facilitating enhanced installed economy as well as giving the CVA the increased ability to dovetail into existing asset management systems. The all-electric design, which can be specified for single-phase AC or DC supplies, also simplifies the process of retrofitting actuators onto existing valves, which has been performed at Wakefield by Rotork Site Services.

A recent example is on the production line where the adoption of Rotork CVA technology for a demanding valve duty has considerably reduced the cost of energy consumption when compared with traditional pneumatic actuation with no loss of performance.

Andy Reynolds, Automation Engineer at the Wakefield plant, takes up the story:

“We were looking for an alternative to pneumatic control valves in order to remove the need for compressed air as much as possible in the area and reduce costs. Based on average air usage of 2m3/hr for a 3” control valve at £0.05 per m3, the running cost would be £870 per annum. The CVA actuator, using an average of 10 watts at £0.15/kW, would cost £13 for the same period. This represents a minimum saving of £857 per annum per valve, as this figure does not take into consideration any leaks in the system.

“Up to now, electrically actuated valves could not respond fast enough to maintain good pressure control in the bottle filling machine. Rotork were confident that their CVA actuator would not only give a similar performance to our existing valve, but would also be cheaper to run. Their confidence was so high they offered us an actuator on a sale or return basis if it did not meet expectations in any way.

“To prove this, the performance of the existing pneumatic control valve on the main product feed into the filling machine was first monitored and recorded. Using an adaptor made at Rotork’s facility in Leeds, the CVA actuator was then fitted to the same valve and connected to the existing 4-20 mA control signal from the PLC.

“After running and monitoring the CVA actuator in a 24-7 operation for 1 month, the results from the two actuators were compared. The graphs clearly show that in production mode the CVA performs equally well, if not better than the pneumatic actuator. However, when in CIP (Clean In Place) cleaning mode, the performance of the CVA is much better than the pneumatic. This is because the CVA actuator does not overshoot the set point like the pneumatic actuator does when the set point is lower and back pressure in the circuit is higher when in CIP mode.”

The Installation at Wakefield

The CVA installed at Wakefield is on the inlet of the bottle filling machine, similar to the one shown below.

Basically there are two operation modes and the CVA plays an important part in both.

The CVA controls this pressure in a PID controlled system, the set point being 4 bar. This not only saves on power consumption and improved control but also lowers the compressed air consumption.

Commenting on the work at Wakefield, Rotork UK Site Services Sales Manager said: “We were asked by CCE to improve the production operation, which has been successfully achieved with the added benefit of a reduced reliance on costly instrument air. We are looking forward to the future with this household name company and the opportunity to introduce our innovative products throughout their global operations.”