The advantage of speed for damper drive applications 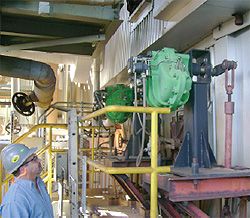 Type K damper drives are also installed in other areas of the Manatee Station.

Rotork has installed Type K damper drives at the Florida Power & Light (FPL) Manatee Station. The benefit of these products is their ability to act quickly, which is essential. A lack of speed can result in serious risks to both site and staff and Rotork was able to provide solutions which meet these requirements.

There certainly is no substitute for speed. In nature, on the athletic field or on the computer, superior speed makes all the difference. Pneumatic-powered damper drives are excellent choices for speed sensitive installations. There are no motor windings or gear sets that can compete on pure speed applications the way a quick acting pneumatic drive can react. For combustion air and flue gas applications, some critical services are very dependent on rapid speed to ensure equipment life, operator safety and peak plant performance. At the FPL 3-Unit Manatee Station, a 2,735 MW generating plant in Parrish, Florida, Rotork Type K damper drives have provided a solution to a critical application demanding quick damper operation.

In the case of balanced-draft power generation boilers, low pressure conditions inside the combustion chamber can lead to some very serious equipment failures. Boiler pressure transients can cause combustion issues that lead to irregular heating in the steam tubes. In extreme conditions, excess negative boiler pressure can collapse boiler walls and buckstays, leading to additional catastrophic failures such as ruined boiler tubes and refractory or even wholesale structural damage. The nature of these events often equate to long term unit shutdown, lost kilowatt production, and expensive emergency site construction repairs. Power generation boilers need a somewhat consistent internal operating pressure environment for efficient and manageable combustion. The ID Fans on a combustion boiler play a critical role in maintaining that reliable boiler pressure. The ID Fan Inlet Damper Controls that regulate fan induced pressure and airflow need to be vigilant to help keep these pressure fluctuations in check. The ID Fan Damper Inlet Drives required for the FPL Manatee Station Unit s1 & 2 require full 90 degree drive and damper movement at full torque load in three seconds or less to safeguard the operation of the boilers.

The outage required removal of the original existing drive installed in 1976 in favour of the new Type K damper drive for the ID Fan Inlet Dampers. There were four ID Fan installations per unit, or eight total drives in this service at the Manatee Station. Type K has since supplied four identical drives to the FPL Martin Station on the east coast of Florida. There remain four final drives to install at this location for full completion of all 16 ID fans. That outage is scheduled for 2013.

The existing drives were in excess of 30 years old. In addition, they were not HART compatible with the plant’s new DCS system and the manual overrides were unreliable on the aging damper drives.

Type K offered a ‘drop-in-place’ retrofit drive matching the existing damper drive footprint that featured smart positioner technology and integrated air volume boosters to obtain the rotation speed required. Type K also completed factory acceptance testing on the drives and obtained the test cycle times as recorded by the smart positioner. The results of the testing were video recorded and documented for FPL to review prior to shipment.

An additional challenge dictated that hinged man-way door be accessible to service the ID Fan, requiring that the manual override handwheel be rotated to the 12 o’clock position. Type K engineered the solution to the project manager’s satisfaction.

The on-site performance testing for damper drive speed was conducted at the power plant early on a Sunday morning at about 2.00am. This was a full load/installed equipment proof-test scheduled typically toward the end of a planned outage. This acceptance test is critical to build confidence in the plant unit trip and boiler shutdown process. The Type K Drives performed as quickly and as smoothly as factory testing had indicated. At full boiler pressure and damper load, the drives rapidly failed to the fully closed position as required. Passing this test is primary to outage completion and full sign-off for boiler readiness to generate electricity. The trip test was witnessed by several key FPL personnel at the control room and by field instrumentation technicians at the ID fans.