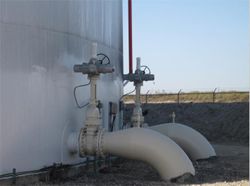 Martin Midstream Partners L. P. (MMLP) needed to carry out a site update in order to be able to handle a second product. Rotork’s IQ electric intelligent actuators with Pakscan™ P3 Master Station fitted with a wireless interface module were chosen as the solution to this requirement, as centralised control was essential.

In 2011, an operating division of MMLP began building a single product tank farm at the Port of Corpus Christi, Texas, consisting of six 100,000 barrel tanks and four booster pumps to serve nearby truck and ship loading terminals. Originally, the facility was designed for a single hydrocarbon product. The terminal’s original specifications did not require any automated valves to isolate the individual storage tanks.

During construction, MMLP decided to upgrade and introduce the capability to handle a second product. This necessitated the requirement of isolating the tanks to avoid cross-contamination. To achieve this, MMLP chose Rotork’s electric valve actuation system under centralised control. The Rotork system incorporates all appropriate interlocks which safeguard the integrity of the terminal operations.

Now in its third generation, Rotork Pakscan has been widely adopted in many worldwide industries, where the use of a fully redundant 2-wire bus loop linking multiple numbers of actuators over long distances is recognised as delivering reliable monitoring and control with dramatically reduced installation and cabling costs in comparison with traditional hard-wiring.

For this project, the customer has been able to take advantage of additional functionality and further economies through the introduction of Pakscan P3 with a wireless field network. Wireless Pakscan eliminates virtually all the costs associated with the installation of wiring, cable ducts, safety barriers and associated equipment required for network cabling, whilst enabling an increased level of information from the actuators to be communicated over the wireless network.

Rotork’s lead service technician on the project, explains: “The customer didn’t want to add a lot of new conduit and wiring to control the actuators, so the wireless Pakscan system was a perfect fit.”

How does it work?

First introduced in 2009, the Rotork Pakscan P3 wireless network control system is a further development of the Pakscan system used in thousands of plants throughout the world today. Simply stated, the system establishes a secure wireless mesh network that is used to control actuators and other field devices throughout the plant and to gather important operating data for asset management and preventative maintenance from the connected valve actuators.

The wireless system operates on the license-free, globally recognized 2.4 GHz ISM (Industrial Scientific and Medical) frequency band and has a line-of-site operating range between each device of approximately 30 metres indoors and 100 metres outdoors. Up to 60 actuators can mesh with a wireless coordinator.

In a Pakscan wireless mesh network, each actuator on the network can act as an independent router to help signals get to their intended destination. A correctly designed network will be configured to provide two or more paths between each actuator and the wireless coordinator. Therefore, if the normal traffic route is blocked or if a hardware or communication failure should occur, it can be overcome as the network dynamically determines an alternate route for the data to travel. This self-healing network mimics the loop-back capabilities of the established Pakscan 2-wire loop.

The Pakscan P3 wireless network card gives the user access to all the standard control and monitoring features and data available from the wired Pakscan system, together with the diagnostic and asset management information stored as standard by Rotork IQ actuator data logger and configuration files, which is otherwise only downloadable locally, using the IQ handheld commissioning and communication tools. Using built-in web pages it allows easy extraction of these files from the control room over the wireless network.

The installation at Martin Resources consisted of 16 Rotork IQ40 non-intrusive intelligent actuators, one Pakscan P3 wireless master station and three network repeaters, which are used to overcome radio black spots and ensure the redundancy of the network.

Following the success of this project, the same actuation and control system will be extended to three additional tanks to be built during the second phase of construction at this facility.