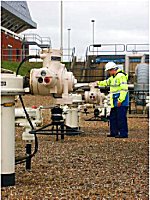 Rotork has been awarded phased contracts to install new electric actuators on an approximate total of three hundred major valves during a strategic modernisation and upgrade programme at the National Grid Transco (NGT) gas terminal at Bacton in Norfolk.

Rotork is replacing earlier versions of its own actuators, which in many cases, have been in operation since the Bacton plant first began processing North Sea natural gas in the early 1970's.

Actuator replacement is being carried out by Rotork's specialist Site Services Department, working closely within the daily operational constraints of the site to minimise the risk of any interruption to normal plant operation. The latest ATEX certified Rotork IQ2 intelligent electric actuators are being installed, the majority being IQ70 models operating buried service 36 inch Cameron pipeline ball valves. Most of the valves control the movement of gas received from three North Sea gas producers situated on an adjacent site. The gas undergoes filtering, blending and quality assurance processes, including checks on calorific value, volume, pressure and temperature, before it is pumped into the NGT National Transmission System.

For the last two phases, Rotork took on the total installation responsibility including the electrical work and appointed Dabbrooks Ltd from Great Yarmouth to connect the actuators to Bacton's upgraded centralised monitoring and control system. Each actuator provides continuous valve position and availability data, supported by alarm signals covering, for example, loss of power or incomplete valve movement. As a part of the NGT-wide Ulysses Project, data from the Bacton control system is also being communicated by telemetry to NGT operational headquarters at Hinckley in Leicestershire.

Rotork's contracts are being performed in several stages. Work began in 2002 and is expected to continue for another two years.