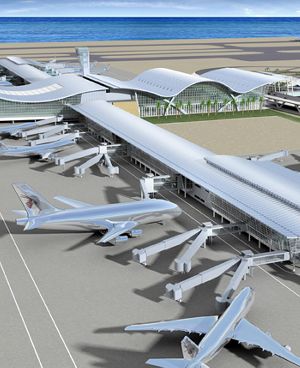 Pakscan-enabled IQ intelligent electric actuators have been ordered for the aircraft hydrant refuelling plant at the new Doha International Airport, which is due to open in 2011.

Ashley Watkins, Rotork Middle East Regional Manager, explained: “Rotork’s actuation technology will help to cut the ‘turnaround time’ (the period between the aircrafts’ landing and take-off) at the airport.  This will assist the proper regulation of airport traffic as the planes will not be kept waiting on the tarmac for refuelling.”

Ashley was speaking at a reception for a visiting trade mission to Qatar, organised by the Energy Industries Council (EIC).

Ashley continued: “Rotork actuators will control fifty Cameron Double Block and Bleed valves and will facilitate swift refuelling of the aircraft on the airport apron pad itself.  This means that it will not be necessary to use tankers for refuelling purposes, which will make a significant contribution towards maintaining strict security at the airport.”

The Pakscan digital control network will enable the actuators to be comprehensively monitored and controlled from centralised control areas.  The system is designed specifically to cope with the long distances between the control room and field units encountered with the majority of actuator installations, without any loss of communication performance or the need for repeaters on the network.