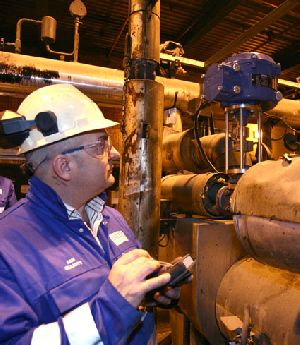 Control valve applications in the USA and the UK are beginning to provide evidence from the field that the recently launched Rotork CVA electric actuator is living up to the demanding expectations of end users.

“The CVA is working perfectly, it holds the set point, no deviation and responds very quickly to a change”; explains a spokesperson from a major power plant in the Boston area of the USA.  Controlled by a 4-20mA signal, the CVA is installed on a three-way two-inch hot water blending valve in the station’s demineralisation plant.

The electric actuator has replaced a spring diaphragm actuator and pneumatic positioner that had proved to be unreliable and suffered from exposure to the harsh conditions that are synonymous with power station environments.  The operators are now also able to close the valve at the end of a cycle for isolation of the hot water tank, which they couldn’t do before due to the unreliability of the positioner.

“It does exactly what we want for positioning.  We don’t even know it is there;” concludes the  spokesperson, who is now considering the CVA for further applications in the plant.

In the UK, Drax Power Station has a CVA installed on a one-inch globe control valve that regulates the steam inlet temperature in the boiler fuel oil pump house.

The CVA replaced a pneumatic actuator and positioner and operates from the same 4-20mA signal.  Operation has been a success, with zero deviation from the desired value to the measured value, and as a result the operators will be looking at the CVA as an option for future control applications at the station.  Another factor in its favour has been the ease with which it was installed on the existing valve.

Available for the direct-drive actuation of linear or quarter-turn control valves, the CVA demonstrates highly accurate control valve automation, combined with advanced, non-intrusive calibration, valve diagnostics and the simplicity, user-friendliness and economy of electric operation.  Mechanical features include the Rotork ‘double-sealed’ enclosure, whereby internal electrical components are permanently protected from the effects of the operating environment.

The IP68 dust tight, water tight and temporarily submersible (7 metres, 72 hours) enclosure is universal to all models in the CVA range, including those with hazardous area approvals.  The CVA is engineered to deliver high precision valve positioning and facilitate the tightest possible tolerances on the process variable, enabling process quality and output to be optimised.  On loss of mains power, built-in super-capacitors allow the CVA to move the valve to the desired position, programmable as open, close, any intermediate position or stay-put. Manual operation is also optionally available.

The CVA utilises a new variant of Rotork’s well established ‘non-intrusive’ communication technology for actuator programming and adjustment.  Actuator set-up and configuration is performed using a Bluetooth enabled PDA or PC running Rotork Enlight software, which is freely downloadable from the Rotork website.Every CVA incorporates an onboard data logger, enabling operational data such as valve torque profiles, dwell times, actuator events and statistics to be downloaded for detailed investigation and diagnosis.  After analysis, any required configuration changes can be uploaded into the actuator.