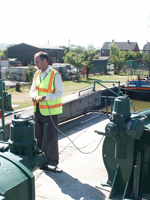 Rotork's specialist valve actuation Site Services Department has recently completed a comprehensive modernisation project for the UK Environment Agency to improve operation and safety at a Victorian tidal gateway on the Humber Estuary in Lincolnshire.

The gateway - essentially two locks in one - at South Ferriby maintains the water level and helps to prevent silting in the River Ancholme whilst allowing the passage of ships and boats. In past times the river, which runs in two intertwining 'Old' and 'New' channels - the result of considerable engineering work - was an important route for transporting cargo from rural communities to industrial towns. Today, although the majority of traffic is for pleasure, the river is a significant environmental asset and land drainage channel.

The lock, a Scheduled Monument, was built in 1843 to a Sir John Rennie design and virtually all of the operating machinery that has been modernised dates from that time. Eight gearboxes open and close flood gates and ebb gates within the main lock chamber by means of chain drives whilst a further four gearboxes operate valves - colloquially known as "cloughs" - in the lock walls to allow water in and out of the lock.

Rotork was awarded the contract for Phase One Works as part of the Environment Agency framework agreement for valve actuators, with an expanded scope of work relating to the additional site activity required. This involved dismantling and refurbishing the twelve original hand operated gearboxes, the re-manufacture of any worn out parts, design and fabrication of adaptation and pedestals for the new Rotork IQ electric actuators and all site electrical installation and commissioning work.

The IQ actuators are individually operated by a hand-held plug-in pendant which enables the lock keeper to observe and accurately control the position of the gates and the water level in the lock. Previously, looking into the lock and hand winding the gearboxes at the same time was not possible, making single-handed operation of the lock difficult as well as laborious.

The successful completion of Phase One Works at the South Ferriby tidal gateway modernisation project has secured the future operation of the lock. Senior Lock Keeper Alan White explains: "Motorising the flood gates, ebb gates and cloughs enables us to operate the lock's functions more safely and with better accuracy for the continuing benefit of the river and its environments. Also, with approximately one thousand boats using the lock during the April-to-October season the task will be far less arduous than when it was all done by hand."