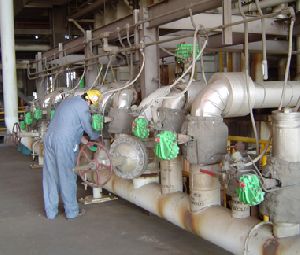 High-pressure spray water is used to sluice bottom ash and pyrites from the boilers’ hopper bottoms and to carry the ash out of the plant. The valves used are typically ANSI Class 300 double-offset high-performance butterfly designs ranging in size from 3” to 12”, automated with double-acting actuators.  They cycle from four to ten times per day and discharge to atmosphere, creating a very high pressure drop. The flow media is re-circulated ash water that is abrasive and flows at pressures between 400 and 500psi.

In plants owned by AEP, Duke Energy, Luminant Generating and other utility companies around the world, K-TORK actuators have provided over 10 years of maintenance-free service whilst preserving the life of the valves and valve seats in these arduous duties.

Among the challenges, it is imperative that the valves close fully and with zero leakage in a high pressure drop state.  If the valve disc moves even slightly from the seat, the abrasive, high-pressure water will “wire-draw” or cut the butterfly valve seat. Traditionally, rack-and-pinion or scotch-yoke actuators have been used in this application, but “slop” or hysteresis in the rotary-to-linear conversion allows for the pressure in the pipe to move the disc from the seat, often causing premature failure of the valve after a period of only three to twelve months.

The problem becomes more acute when multiple valves are leaking, lowering the available back-pressure at the header, which makes it difficult or impossible to move the ash from the boiler.

When assembled to the valve with a ‘No-Play’ coupling, the K-TORK actuator has zero lost motion, “slop” or hysteresis.  The one-piece vane and drive shaft cannot be back-driven and will hold the disc of the valve firmly in place.

Additional challenges include the location of the valves on a manifold at the bottom of the boiler where space is critical and plant air can be poor quality.  K-TORK provides the smallest torque-to-size ratio and the double-opposed lip seal design is forgiving to dirty or contaminated air.

Finally, longer run time between shutdowns demands increased reliability from the equipment in these critical applications. In particular, as the number of plant maintenance personnel has decreased, actuators that reduce maintenance (seal replacement) time and work orders have a direct payback to the owner, especially when valve life can be significantly increased through improved actuator performance.