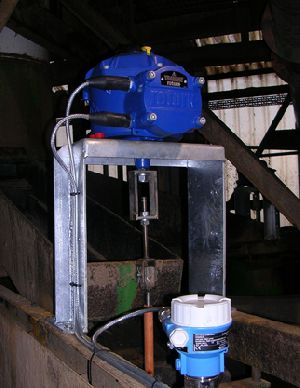 The MEP TBS Hydrosizer is used in the mining and mineral process industries throughout the world to separate materials, remove contaminants and beneficiate mineral particles that are generally less than 5mm in size. Applications include coal preparation, the preparation of high-grade sand for concrete products, glass making or foundry use, the removal of silica from iron ore and the separation of a range of minerals such as zircon from sand, plus many others.

The TBS Hydrosizer process utilises an upward current of water to create a hindered settling classifier in which material within a narrow size band can be held in a state of ‘teeter’. Smaller or lighter particles entering the classifier are displaced to the overflow, where they can be collected, whilst larger or heavier particles migrate to the bottom and are discharged through spigot valves, fitted in the bottom of the TBS Hydrosizer.

A well defined separation is achieved by maintaining a constant flow of upward current water, even though the level and nature of the mineral content in the water can cause the density to fluctuate. The constant flow of material is achieved by means of a 4-20mA signal from a hydrostatic density probe within the Hydrosizer Tank, which is used to control the CVA actuator operation. The CVA adjusts the position of a valve, allowing material to discharge at a rate that is determined by the hydrostatic head.

With resolution, repeatability and hysteresis performance quoted at less than 0.1% of full scale, the swift response and positional accuracy delivered by the CVA actuator enhances the efficiency of the process. In addition, integral super capacitors enable fail-safe operation of the CVA to close the valve on loss of mains power or loss of control signal to prevent any damage or contamination of the product.

The all-electric CVA actuator is economical to install and easy to set-up using Rotork’s non-intrusive Bluetooth communication technologies. A data logger in the actuator stores operating data in historical order that can be downloaded and diagnosed in order to monitor the condition of the valve and plan for any perceived maintenance requirement in advance, without interruption to production routines. The CVA’s rugged construction and double-sealed IP68 watertight enclosure is designed to withstand the harsh and exposed environments often encountered in the mining and mineral industries.