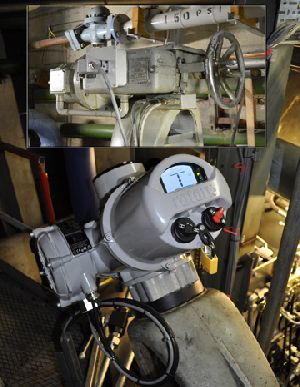 Some of the very first valve actuators to carry the Rotork name are being replaced with the company’s latest intelligent IQ3 actuators after 60 years of unbroken service on a demanding and critical duty in the aerospace industry.

Dating from 1953, the Rotork Model 100A actuators were part of a contract to operate the valves on one of the world’s first large scale supersonic wind tunnels. Designed and built by the then newly formed Aircraft Research Association at Bedford, the Transonic Wind Tunnel was an ambitious project created to keep the British aviation industry at the cutting edge of technology by testing the effects of supersonic speeds on new aircraft designs. The facility is operated by a 25,000hp AC motor and a 13,000hp DC motor. In addition a 10,000hp compressor is used to provide extra power to enable testing at high transonic and supersonic speeds up to mach 1.4 (1065mph approx).

In the early 1950s Rotork was still in its infancy and the award of this significant and prestigious contract was a milestone on the route to the establishment of what is now the world’s leading manufacturer of valve actuators and flow control products. Since the wind tunnel was first commissioned in 1956 it has been in virtually continuous daily operation, testing military and civil aircraft from around the world. It has played a vital role in the development of legendry projects including the TSR2, Harrier jump-jet and Concorde. Today the work continues with programmes including Airbus, the Eurofighter Typhoon and the Lockheed Martin F-35 JSF.

Remarkably, although designed for isolating valves, the Rotork 100A actuators have been performing modulating duties throughout their sixty years of service, constantly altering the position of large gate valves by small degrees to control the level of wind speeds and provide the data that is needed for the highly accurate measurement of test results. It is the automation of this process with a bespoke control system incorporating a Modbus control network which has necessitated the replacement of these units with new IQ3M actuators that are specifically designed for modulating duties.

Because there is a constant demand to use the wind tunnel, careful and detailed planning has taken place to ensure that the retrofit operations can be successfully completed in the brief periods of time that are available between test programmes. The restricted access around the valves also demands particular attention. Detailed planning paid off when the first two actuators were removed and the replacement IQ3M actuators installed and commissioned in two days, half the allocated time allowed before the wind tunnel was due to re-start operations.

Richard Harvey, Senior Process Engineer at the Aircraft Research Association, is pleased with Rotork’s contribution to the success of the project. He explains:

“We are currently undergoing a £1.5million upgrade programme for equipment that controls our Transonic Wind Tunnel. One of the packages of work that is being undertaken is to replace our auxiliary compressor valve drive units. These were selected because they are amongst the oldest pieces of equipment on site and they are being used on a daily basis. The existing Rotork 100A actuators have functioned very well considering they are being used well outside of their rated specification, but at 60 years old they were due for retirement.

“The replacement valve drives needed to be very reliable and have an accurate positional indication as they are vital for the operation of the tunnel and the data we collect. We approached Rotork with our specification who pointed us in the direction of the new IQ3M35 actuator. I was delighted with the vast amount of information and precise control that I could achieve using the Modbus interface card. The installation was a success and the tunnel drivers have reported that the new actuators provide them with much better control. We are now looking towards our next maintenance period where the remaining actuators are due to be replaced.”