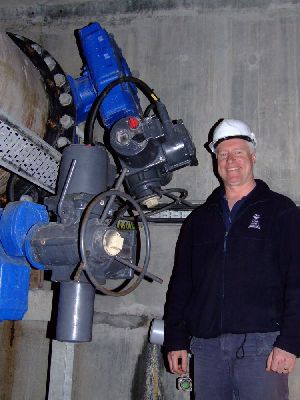 To the casual observer, it looks like a set of modern sea locks and outfall penstocks such as can be seen all around the coast of the UK.  But, as part of one of the country’s most successful regeneration schemes, it is much more than that.

The Cardiff Bay Barrage – a major engineering project that took over five years to build at a cost of £220 million – is also a highly sophisticated environmental protection mechanism designed to regulate the water level in the 500 acre fresh water Cardiff Bay and to isolate it from the sea by preventing the ingress of sea water.

For over a decade, since the barrage was first completed, the enormous butterfly valves in the underground pipework network that controls the environmental protection process have been reliably operated by Rotork IQ actuators.  The pipework design comprises of a man-made sump in front of the locks on the bay side of the barrage which leads down to a 1200mm pipe installed beneath the barrage in order to return to the sea the salt water introduced to the bay by lock activity. Two branches from this main pipe lead to Locks 1 and 2, enabling the salt water to assist the filling of these locks at times of low river flow into the bay.  The branches can also be used to transfer water between the two locks as circumstances dictate.

The IQ actuator on the main pipe valve is fitted with a current position transmitter to enable the valve to be opened at percentage increments in order to control the flow of salt water from the sump.  The configuration of the three other actuated valves in the network can be altered to fill either or both of the locks or transfer water between them.

Under PLC control, the actuated valves are remotely operated from the Salt Water Panel in the Barrage Control Room.  Data from floating analysers in the bay assist in gauging the level of salt water in the sump, enabling the operators to open the valves as required and divert the salt water into the appropriate destinations.

Because Cardiff Bay is now a recreational and environmental asset, the frequency of actuator operation fluctuates from season to season and from day to day.  In busy periods there can be over 150 boat movements through the locks during a weekend.  Meanwhile the actuator on the main inlet control valve is constantly in operation throughout the year.

In an adjacent area of the barrage a fishpass is installed to allow the uninterrupted travel of migratory fish from the Severn Estuary to the bay and to the important Taff and Ely salmon rivers that feed into it.  Like the locks, there is more to this installation than meets the eye.  Designed to assist the ongoing scientific study of fish health in a changing environment, the fishpass is equipped with six Rotork IQ actuators to control various penstocks and screens leading to different areas of the installation, depending on tidal conditions.

The actuators operate penstocks to allow fish in and out of a fishtrap, where they are examined by the Environment Agency, through a gravity attraction area, which allows fresh water to flow out of the barrage to draw the fish towards the fishpass, and through the Denil pass, man-made rapids that enable the fish to travel ‘uphill’ into the bay. An additional IQ actuator operates a screen that prevents debris from travelling through the fishpass.

The operation of the fishpass actuators is controlled by a SCADA system in the Barrage Control Room, which is backed up by a motor control centre in the unlikely event of a fault.