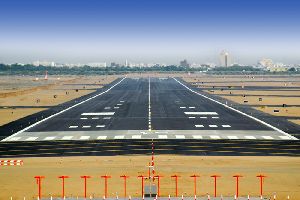 Rotork IQPro intelligent electric actuators have been selected for a major expansion project at the King Abdul Aziz International Airport (KAIA) in Jeddah, Saudi Arabia.  The General Authority for Civil Aviation (GACA) plans a significant development of the airport over the next five years that will enable the facilities to accommodate 35 million passengers.  Included in this, a new state-of-the-art terminal with 74 jet bridges will receive aircraft of all sizes, including the 555 seat Airbus A380.
The Airfield Facilities Upgrade is the first phase of the development programme, for which Rotork is supplying 120 IQPro intelligent electric valve actuators to Cameron Valves for the control of double block and bleed valves installed on the hydrant refuelling network for the A380.The actuator orders include Rotork’s latest Pakscan P3 two-wire digital bus control system, which is particularly advantageous in the spacious environments associated with an airfield, where the distance between the actuators in the field and the centralised control rooms can be measured in many kilometres.During contract negotiations Rotork was able to successfully propose the Pakscan solution as an alternative to the Modbus system originally requested, which would have encountered serious restrictions due to the long cable runs involved.  Currently, two Rotork Pakscan master stations have been ordered to control and monitor actuators and associated equipment on the refuelling installations.Rotork’s order, which is part of a contract awarded on a design and build basis to Almabani General Contractors, was won following a series of meetings between Almabani General Contractors and Rotork’s Middle East Regional Office in Abu Dhabi.  Rotork’s agent in the Kingdom of Saudi Arabia, Al Hugayet Trading Establishment, will be supporting the installation, which will be commissioned by Rotork’s Service Centre in Damman.  Almabani General Contractors’ contract consists of the upgrading of thirty-year old airfield facilities, extending the runway to 4000 metres, widening all shoulders to accommodate the Airbus A380 and building a new 270,000 sq. metre apron for the Hajj Terminal.