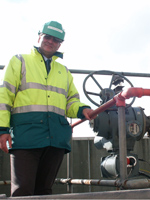 The Hamble Oil Terminal on the banks of Southampton Water is the latest BP storage depot to complete a comprehensive upgrade of its valve actuation control systems.

Like the BP terminal at Kingsbury, which completed a similar upgrade in 2004, the majority of the tankside isolating valves at Hamble are fitted with Rotork 'A' range explosionproof actuators that were installed over twenty years ago, together with one of the first Rotork Pakscan two-wire digital control systems to be sold in the UK. With the passing of time it had become necessary to update the control system to secure uninterrupted future operation and, as at Kingsbury, this has been achieved without the additional expense of replacing the actuators. Instead, each actuator has been equipped with an upgraded control module incorporating the latest Pakscan field card in an operation that can be quickly and economically performed without removing the actuator from the valve.

The work has been carried out by Rotork's specialist Site Service Department who first upgraded thirty-two 'A' range and six 'IQ Mk1' actuators on the tanks that store aviation fuel and other refined products. These products arrive at Hamble by ship and leave either by road tanker or through pipelines to major airports. The actuators are now linked on two serial bus loops to new Pakscan IIE master stations installed in the site's central control room.

The second phase of work involved the five 28.5 million litre capacity tanks that store crude oil delivered from the Wytch Farm field through a 53 mile underground pipeline. This oil is stored at Hamble and exported by sea for refining. Ten 'A' range actuators have been upgraded and linked to a new Pakscan IIS master station, which is specially designed for relatively small numbers of actuators. The last part of the upgrade involved a further Pakscan loop on the sea jetty, controlling the import and export pump valves. A panel in the control room on the jetty also displays the valve positions on the storage tanks to further assist import/export operations, which normally continue on a 24 hour, 365 days a year basis.

All four Pakscan loops at BP Hamble interface directly with the Endress & Hauser PC-based Fuels Manager 2000 software that supervises the operation of site activities from the central control room.

Integral interlocks in the control structure ensure that the Rotork actuators can only be operated in a sequence that allows the safe movement of products during tank filling, importing and exporting operations. Successful completion of the Pakscan upgrade has given the actuators a new lease of life, enabling them to continue to control oil movements throughout the 54 acre site with the maximum safety and security