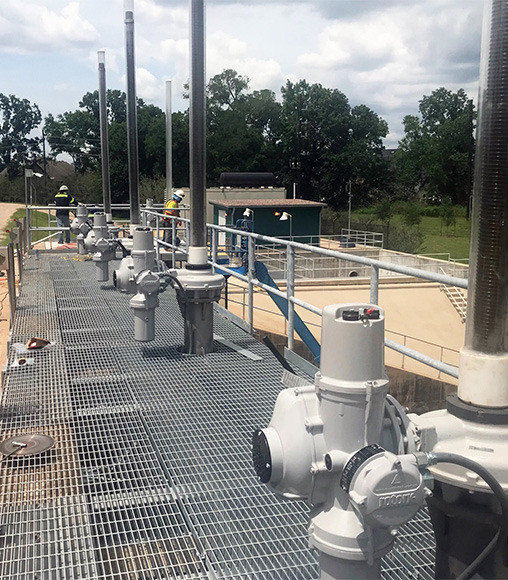 Rotork intelligent electric IQ actuators with motorised IB multi-turn bevel gearboxes have been installed on sluice gates adjacent a large river in order to protect the residents and businesses living in a nearby community, with a population of almost 14,000. Community meetings were held for this development and it was decided to enhance the existing flood protection systems.

These sluice gates were constructed following discussions caused by Hurricane Harvey in 2017, which caused over $125 billion dollars’ worth of damage in the Houston area. During this time many locations in the 7-county region experienced serious flooding.

Storm water facilities were upgraded throughout the billion dollar golfing community and in other areas within the surrounding development. As the area is very flat, possible flooding can be a concern, as storm water flows into these facilities and down to the sluice gates, connecting to the nearby river. The gates remain open at all times so that water can flow into the river. However, during periods of excessive rainfall and heavy storms, when the river itself poses a flood risk, the actuators close the gates and seal the development from the river. The runoff water is then pumped away over the top of a nearby levee, allowing it to eventually run back into the river.

The installation of the actuators helps to ensure that the people of this community remain safe from the damage which could otherwise be caused by water infiltration into the development.

Rotork Site Services was responsible for commissioning the actuators with gearboxes and the start-up, ensuring that all products were fully operational.

Intelligent electric IQ actuators were chosen for this application due to the remote location of the sluice gates, which would have prohibited an hydraulic or pneumatic solution. Additionally, the close proximity of an electrical generator meant that a power supply was readily available.

Rotork’s IB gearboxes are suitable for use on sluice gates and for the most demanding motorised applications. They’re made with cast steel and when combined with the IQ actuator they can reach a torque of up to 44,000 Nm (32,452 lbf.ft).