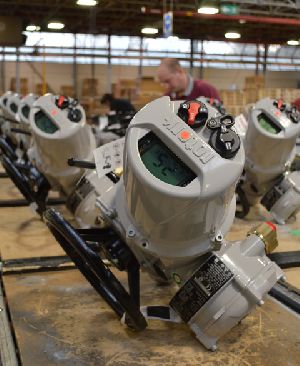 During the past decade, thousands of Rotork IQ intelligent electric valve actuators have been installed on stages one and two of the 4000 kilometre long West-East Gas Pipeline network that runs through sixty-six counties in the ten provinces of China. The first stage of this huge undertaking, which opened in 2004, brings natural gas from the Tarim Basin gas fields in Xinjiang to the Yangtze River Delta area for the production of electricity.

In 2008 construction began on a second pipeline, in part running parallel to and interconnected with the first. The second pipeline runs from Xinjiang to Guangzhou and is being followed by two further pipeline developments, all designed to supply billions of cubic metres of gas to satisfy the burgeoning demand for energy in China’s industrial and population centres.

With construction of the third stage now underway, Rotork is beginning to fulfil orders with IQ3 intelligent electric actuators. Launched in 2012, the IQ3 is designed to dovetail seamlessly into existing IQ actuator installations and control protocols, whilst introducing new levels of functionality and asset management abilities, combined with further refinements to a well-proven and rugged mechanical design.

The large toughened glass wide angle indication window is the focus of attention for non-intrusive two way wireless communication and multi-functional indication. An LCD segment display provides positional and warning icon information, whilst actuator setup and operating menus along with detailed diagnostic and operational data screens are clearly displayed in dot matrix format. Diagnostic graphics present a window into the process, showing the valve torque and usage profiles along with service logs, facilitating real time analysis directly at the actuator.

Advanced IQ data logging and communication capabilities have been increased in response to the end users’ desire to access more data, both in the field and in the control room.

A hand-held setting tool with Bluetooth® wireless technology also enables the data from the actuators to be transferred to a PC for analysis using Rotork Insight2 diagnostic software. Valve maintenance requirements can be identified and anticipated, eliminating unplanned interruptions or over-cautious planned maintenance outages.

A patented absolute encoder with only four moving parts, built-in redundancy and self checking mechanically tracks valve positions if the actuator is manually operated when the power is off. No power is required for the actuator to reliably and accurately measure position.

Mechanical improvements include new handwheel assemblies, new non-intrusive local control switches and optimised corrosion protection by material and coating selection. Thrust bases have been re-engineered as separate components on all models in the IQ range, enabling actuators to be removed from the valve without altering the valve position. The IP68 watertight and temporarily submersible double-sealed enclosure is universal to all actuators, including those with explosion-proof certification, ensuring long term reliable performance in the most challenging environments.