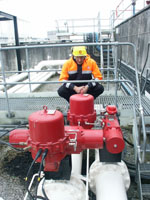 The installation of a new Rotork Pakscan two-wire digital valve control system at the ChevronTexaco oil terminal in Plymouth sees the completion of a project that has transformed the site from manual to fully automated valve operation.

Winner of the ChevronTexaco Most Admired Terminal Award in 2004, the 5.5 acre Plymouth site stores up to 59 million cubic metres of petrols and distillates which are imported by ship and exported by road tanker, serving Cornwall, Devon and parts of Somerset. Opened originally in 1934, the current tankage was built in 1971 when the site was owned by Shell and BP. ChevronTexaco became part owners during the 1990's and took over the site completely in 2001.

At that time, Rotork 'A' range electric actuators and an early Pakscan control system were installed on the manifold valves that direct the flow of imported fuels to the appropriate storage tanks, but the inlet and outlet valves on all seven of the tanks were manually operated. ChevronTexaco embarked on a programme of modernisation with Rotork's specialist Site Services Department, utilising redundant 'A' range Rotork actuators and valves that had previously been installed at the closed-down Shell West Bromwich terminal. As each tank at Plymouth was taken off-line for routine cleaning, repair and maintenance, actuated valves were installed in series with the existing manually operated valves to enable electrical opening and closing using the actuators' pushbuttons.

At the same time a new centralised control room was built to house the Fanuc 90/70 PLC system and UCOS SCADA package that now supervises the 24 hours a day, 365 days a year import and export activity at the terminal. To complete the valve automation programme, the tankside actuators are being retrofitted on-site with Rotork Pakscan field cards and linked to a new Pakscan IIE master station in the control room. The actuators are linked to the master station on a single two-wire bus loop, providing a very economical wiring solution for data communication, especially in the large areas associated with tank farms. In addition, the loop configuration enables data to be transmitted in both directions, improving system integrity and immediately identifying the position of any fault or break in the network. The original Pakscan system on the manifold valve actuators has also been incorporated into the upgrade, enabling all valve operating sequences for importing and exporting to be centrally monitored and controlled on the upgraded Pakscan highway. The new master station communicates with the Fanuc PLC to enable automatic supervision, indication and logging of valve operations by the SCADA programme.

Rotork actuators have also been installed in other areas of the site to perform important safety and environmental protection duties. Rotork Skilmatic electro-hydraulic fail-safe actuators have replaced obsolete actuators on ESD (emergency shutdown) valves fitted on the product lines between the tanks and export loading bays. Emergency pushbuttons on each loading bay and at other strategic areas in the plant cause these actuators to immediately close and stop the flow of product in the event of any perceived or potential hazard. A Rotork IQ electric actuator has also been installed on the previously manually operated final outfall interceptor valve. Linked to a hydrocarbon sensor in the final interceptor chamber, the actuator will automatically close the valve if any product is detected in the surface water that drains from the site, protecting the sewer and signalling an alarm to the central control room.