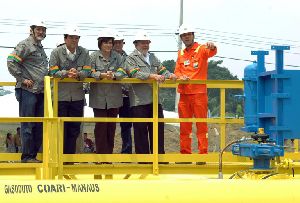 Rotork pipeline valve actuators have been supplied for a new transportation network that has heralded a fundamental improvement in the use of energy products in the Amazonian region by enabling natural gas to be used instead of diesel and fuel oil, particularly for the generation of electricity. To date, over one hundred Rotork HPG high pressure gas and EH electro-hydraulic actuators have been installed on the pipeline network.

The inauguration of the 661 kilometre Urucu-Coari-Manaus gas pipeline portion of the project marks the beginning of operations for one of Brazil’s largest gas transportation projects.  The significance of the project has been endorsed by the presence of the President of Brazil, Luiz Inacio Lula da Silva, at the official opening of the pipeline at the Refinery Isaac Sabbá in November 2009.

The Refinery Isaac Sabbá is the first to receive natural gas from the Solimões Basin, Brazil’s second largest reserve, estimated at 52.8 billion cubic metres.  The new gas pipeline’s initial transportation capacity is 4.1 million cubic metres per day, which will rise to 5.5 million during 2010 when two intermediate compressor stations between Urucu and Coari come on-line.  The pipeline is operated by Transpetro and, as with the company’s other pipelines, is designed for remote, automated control from the National Operational Control Center (CNCO) in Rio de Janiero.

In March 2010 President Luiz Inacio Lula da Silva was also present at the opening ceremony for the Gasene (Southeast – Northeast Gas Pipeline Integration) section of this major project, together with Jose Sergio Gabrielli, the President of the Brazilian oil and gas company Petrobras.

More Rotork actuators are installed on this part of the project, including the 303 kilometre GASGAV pipeline, where actuators have been supplied by Rotork Fluid Systems representative Superquip Oil & Gas.

At the opening ceremony the President of Brazil stressed the importance of investment in research for the development of the country, adding: “This project is remarkable because it leads to the Northeast the same opportunity to use clean energy that the South has, in addition to developing local industry”