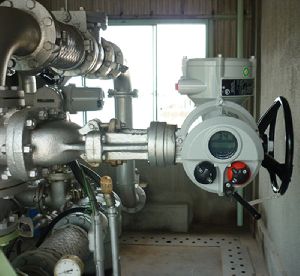 The Japan Maritime Self Defence Force (JMSDF) is tasked with the naval defence of Japan.  Its main duties are to maintain control of the nation’s sea lanes and patrol territorial waters.  For these activities the force operates over one hundred ships and significant numbers of aircraft and helicopters.

The JMSDF operates from four main bases in Japan, one of the most important being at Kure in the south-west of the Hiroshima prefecture.  In 1993, the fuel supply system at Kure was automated with 146 Rotork ‘A’ range electric valve actuators, operated by a Pakscan IIE digital two-wire bus control system.  The success of the Pakscan system at Kure has led to its adoption as the standard at other JMSDF fuel supply sites and by 2009 a total of eleven similar systems have been installed.

The frequency of operation of the valve actuators at these sites is punishing.  For example, at Kure some of the valves are operated two or three time every day and on average every valve is operated once a day.  To ensure the reliability of the plant, the JMSDF therefore initiated a programme of maintenance with Rotork involving the overhaul of actuated valves every three years, with the most frequently operated actuators overhauled annually.

Following a site survey at Kure in 2009, Rotork engineers recommended that the replacement of the most frequently operated of the original ‘A’ range actuators installed in 1993 and the upgrading of the control system to the latest Pakscan P3 version would be the best and most economic solution to provide continuing long term plant reliability.  The recommendation was accepted by JMSDF and as a result Rotork Japan’s Site Services team has upgraded thirty-seven valves with the latest IQPro intelligent electric actuators.  A further sixteen valves will undergo the same upgrades later in the year as part of the on-going Rotork maintenance programme.