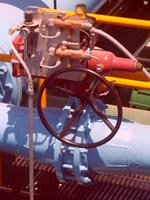 The valve actuators have been installed throughout a major new water treatment plant which supplies up to 500 litres of drinking water per second to the city and port of Mazatlan in the Mexican state of Sinaloa.

A total of 144 Rotork double-acting, scotch-yoke pneumatic actuators have been installed throughout the two project stages of the Los Horcones water treatment plant, which began operating in May 2007. The actuators, from Rotork Fluid Systems' CP and P ranges, operate butterfly valves in sizes from 6 to 20 inches. All the actuators are equipped with DynaTorque manual overrides.