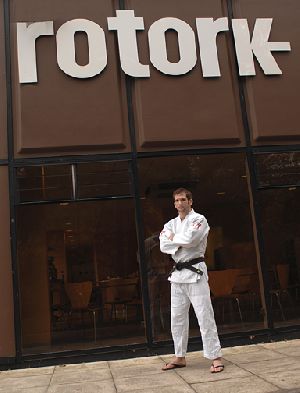 Rotork is proud to support Bath’s local community and is delighted to sponsor a former Rotork placement student in his bid to make it to the Olympics.

Internationally recognised for his Judo, local boy Tom Reed studied a four-year Business Studies course at Bath University and now dedicates all his time training with the British Judo team full-time at the University.  He is aiming to be part of the Olympic Judo team 2012 and the Commonwealth Games in 2014. He is already the British number two in the U81 kg category, one of the seven category weights for both men and women.

Tom first realised his interest in the sport when at the age of eight he went to a local Judo club with his younger brother. He has loved the sport ever since, although the passion for Judo runs in his family. His uncle was a Judo competitor who came fifth at the Junior World Championships, bronze at the Junior Europeans and at his peak was ranked third in Europe. In 2007 Tom was voted ‘Most Improved British Judo Player’ at the British Judo Association Annual Awards and in 2008 he was voted ‘Bath Sports Personality of the Year’. He is also one of the few competitors to have won Cadet, Junior and Senior British Championships.

Tom takes part in the World Cup, Grand Prix and Grand Slam competitions using the sponsorship money that he receives and the achievement of good results at such competitions helps to improve his ranking score. In the last five years Tom has won four gold medals, four silver and three bronze medals in major competitions. This year he accomplished bronze in the Swedish European Cup and the next competition for Tom is the World Cup in Korea early next year.

Tom commented: “I really appreciate Rotork sponsoring me in my quest to get to the Olympics. The sponsorship from Rotork is helping me to travel to the venues where the major competitions are being held, giving me a really good chance of getting into the Olympic team. The start of the year didn’t go to plan but my fitness has picked up and I’m moving up the rankings. 2010 was my best year so far when I won 2 world cup medals; I hope 2012 will be even better!”

Supporting young talent is something that Bath-based Rotork endeavours to do. The company has been running apprenticeship schemes since its beginnings over 50 years ago and during this time many apprentices have become well known figures in Rotork. Some have worked their way up the ranks and now hold key roles including the Managing Director for Rotork Gears, the General Manager at Rotork Singapore and Rotork Service and Retrofit Manager.

Peter France, Rotork Chief Executive, said: “We are delighted to be able to help a young man reach his goals and we wish Tom all the best in his efforts to reach the Olympics. Rotork is dedicated to supporting young talent and this is visible through the apprenticeship scheme that we have been running for over 50 years.”