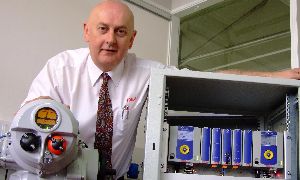 The completion of the new Reliance refinery at Jamnagar on the west coast of India – scheduled for the end of 2008 – will create what is being described as the largest refinery complex in the world. The new refinery is under construction on an area adjacent to the existing refinery, tank farm, export facility and power station, a giant project in itself which was completed in the late 1990’s.

At both sites, Rotork IQ intelligent electric valve actuators have been widely specified, generating an installed quantity of several thousand motorised valves. More than 2500 IQ actuators are now in operation at the original refinery, which has a daily production capacity of 660,000 barrels. The new plant, which will require a similar number of IQ actuators, will nearly double this capacity, producing mostly diesel, petrol and jet fuel. Bechtel is responsible for detailed engineering, project management, site support and construction supervisory services. Rotork is currently receiving orders from valvemakers including Metso Automation and Tyco Valves & Controls.

As with the existing refinery, many of the new actuators will be controlled by the Rotork Pakscan two-wire digital control system, radically reducing the cabling costs involved in linking large numbers of field units over long distances to Distributed Control System equipment housed in centralised control rooms. The site will be amongst the first to be equipped with Rotork’s third generation P3 version of Pakscan, featuring increased information capacity and improved user-friendliness. The P3’s enhanced specification includes Ethernet connectivity, a built-in secure web server and the logging of host messages, field unit commands and status changes with time synchronisation capability. A new master  station HMI (Human Machine Interface) screen replaces the text-only predecessor with clear, easy-to-read icons to facilitate the navigation of screen menus for configuration of controls, alarms and diagnostics.