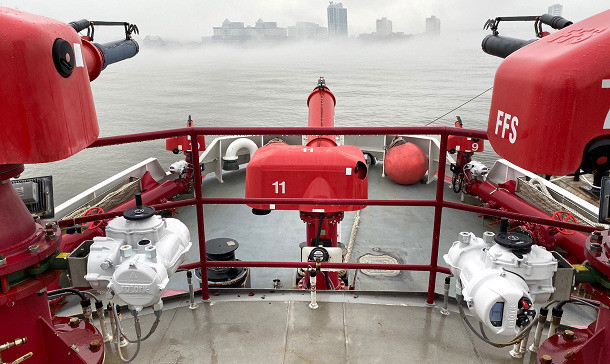 The fireboats used by the Marine Division of the New York City Fire Department (FDNY) use Rotork’s IQ range of part-turn intelligent electric actuators to keep the city safe.

The IQ part-turn actuators provided are used on two fireboats, ‘Firefighter 2’ and ‘Firefighter 343’. The actuators have the important duty of controlling the flow of water to the fire nozzles on deck, meaning that they are vital in the event of an emergency.

New York City is one of the busiest ports in the world and has 560 miles of waterfront. The FDNY has long employed the use of fireboats in order to combat fire-related incidents both on land and on the water. These 2 ships are the largest ones in their fleet.

The IQT actuators are capable of up to 1,200 starts per hour, making them ideal for a fire-fighting application where duty cycles can be very demanding in emergencies.

Read more about the IQ range.