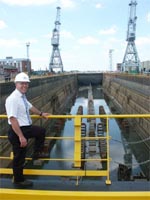 Mick, who is Fleet Support's Facilities Plant Maintenance Manager at the HM Naval Base, was responsible for introducing a landmark contract with Rotork for maintenance of the seventy-three electric valve actuators that control the safe movement of millions of tonnes of water during flooding, emptying and levelling activities in the dockyard's giant dry docks and locks. The first anniversary of the contract virtually coincided with the celebrations, which demanded a level of activity that was out of all proportion to the day-to-day activity in the base, including hundreds of ship movements.

"The event involved over sixty warships of all sizes from many nationalities", Mick explains, "many of which were brought into the Naval Base and opened to the public during two days of the International Festival of the Sea".

"The amount of pumping and levelling operations in the locks and docks - planned by my staff with meticulous detail and attention to timing - put an enormous strain on the pumping plant and valve actuation equipment. Any breakdowns or problems with these crucial operations would have had disastrous knock-on consequences to the crowded programme of ship movements, especially due to the limited timescale of the whole event".

"In fact, the task has proved to be a fitting climax to the first year of the Rotork contract, as no actuator faults or breakdowns occurred and the whole operation was completed without a hitch".

During the year Mick's colleagues Bob Powell and Phil Marsh worked closely with Rotork to ensure that all seventy-three actuators - some of which have been operating for over twenty years - were inspected, serviced and given new warranties. Careful co-ordination and planning ensured that even those actuators in daily use were attended to without causing any disruption to Naval Base activity.

The success of the Rotork contract has now prompted Mick to look at other machinery areas which might benefit from the same type of arrangement. "I thought that the contract would be a win-win situation for both parties, and it has certainly proved to be so," he says. "Over the year there has been a significant reduction in problems, culminating in a successful International Festival of the Sea".