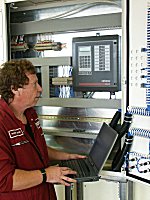 The Site Services department of valve actuation specialist Rotork has completed an economical upgrade contract to give a new lease of life to twenty-four actuators installed on the BP Kingsbury oil logistics distribution terminal in Warwickshire.

The terminal serves petrol stations, commercial customers and airports throughout the Midlands. The upgraded actuators are Rotork 'A' range units, installed in the early 1980's on the tankside isolating valves to control storage tank filling and emptying. At the time of installation the actuators were amongst the first to be linked by a Rotork Pakscan two-wire digital control system to a centralised control room and mimic panel.

With the passing of twenty years, advancements in technology resulted in some of the control system components becoming non-supportable, creating a risk of interruptions to the terminal's operations should the system develop a fault. Also, the actuators, which were still in good condition and operating reliably, were too old to be compatible with the new Pakscan equipment that would be required. However, BP wanted to avoid the expense of replacing them and asked Rotork's Site Services engineers to find the most cost effective solution.

Rotork's successful proposal was facilitated by the modular design of the actuators. The original 'Syncropak Mark 2' integral starter and control modules could be simply removed and replaced with newer 'Syncropak 1600 Series Mark 5' units containing Pakscan field units that provide connectivity with the latest Pakscan systems. In this way all the actuators could be modified without removing them from the valves and the existing site wiring could be used to connect them to the new panel in the central control room. These operations have been performed in the minimum of time, with virtually no disruption to the day-to-day operation of the terminal.

At the mimic panel itself, further savings have been made by replacing the original 240-channel Pakscan master station with the 32-channel Pakscan IIS derivative that is specifically designed for installations with relatively small numbers of valves. Therefore, as a result of this carefully planned contract, all the actuators have been given a new lease of life and equipped with the latest two-wire digital control supervision.