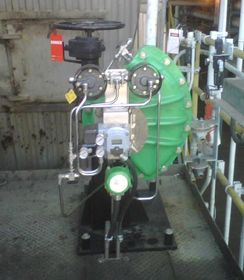 In a recent outage at the station it was necessary to replace the ID fan inlet damper drives on Units 1 and 2, which were over thirty years old and incompatible with the HART protocol of the station’s new Distributed Control System. In addition the manual overrides on the drives had proved to be unreliable.

The equipment selected to replace the obsolete equipment was Type K ‘PM Series’ pedestal mounted TK-6 damper drives, delivering a torque of 5000 lbs-ft at a tested time of less than three seconds for a full 90 degree stroke. Operated by vane-type direct drive pneumatic actuators, these units offer a smoother and faster acting performance than any alternative design.

Type K provided a ‘drop-in-place’ retrofit installation, matching the dimensions of the existing damper drive footprint on all eight of the replacement installations in Units 1 and 2. Integrated air volume boosters were fitted to obtain the required rotation speed and the control interface was provided by smart positioners.

Prior to delivery, Type K completed factory acceptance testing on the drives and obtained the test cycle times as recorded by the smart positioners. Test results were video recorded and documented for Florida Power & Light to review.

Installation was followed by witnessed acceptance testing during which the drives performed as quickly and smoothly at full load as the factory testing had indicated, contributing to a punctual return to boiler readiness for electricity generation.

Following the retrofit at Manatee Station Units 1 and 2, Type K has supplied four identical damper drives to the Florida Power & Light Martin Station on the east coast of Florida. The four remaining drives on Unit 3 at Manatee are programmed for replacement in 2013.