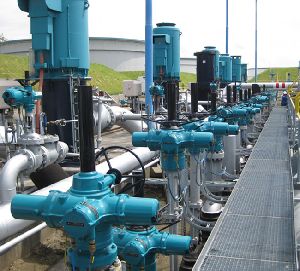 The Maatschap Europoort Terminal (MET), one of Rotterdam’s busiest terminals, handles 18 million tonnes of crude oil each year.  The oil is delivered, stored and blended in the tank farm before it is pumped through pipelines to refineries in Germany and Belgium.

The site, which is owned by a joint venture between Ruhr Oel GmbH and Mafina BV, has relied on Rotork for valve control since the 1970s, when 260 ‘A’ Range Rotork BBC valve actuators were installed.  These actuators have received regular overhauls, but after thirty five years spare parts were no longer available and the cabling was beginning to be less than totally reliable.  MET therefore decided to update the terminal with modern valve control technology that would ensure efficient reliability and meet legislative and environmental standards for the foreseeable future.

The programme of updating the valves began in 2008 when Rotork BV–The Netherlands surveyed and reported on the existing actuator installations and cabling.  As a result it was decided that upgrading all the valves with the latest Rotork IQPro intelligent electric actuators would be the best solution.  The decision was also taken to upgrade the valve control system with Rotork Pakscan P3 two-wire digital control in order to maximise the reliability and economy of the new installations and take full advantage of the advanced monitoring, control and data logging capabilities inherent in Rotork’s IQPro actuation technology.

The replacement work has started in 2010, with Rotork’s specialist Site Services engineers completing the installation of the first 110 of the new actuators. The entire project will be completed over a period of five years.