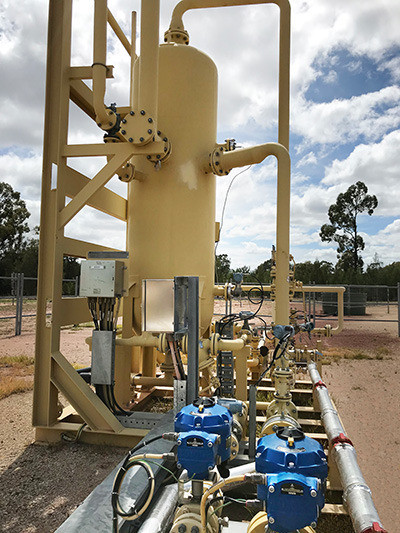 Actuators are essential items of equipment in the oil and gas industry. They provide flow control, which is the management of liquids and gases in industrial applications. Flow control equipment is found across all three sectors of the oil and gas industry: upstream, midstream and downstream. This article will explore the challenges and opportunities that surround traditional pipelines, as well as well as the unique circumstances surrounding pipelines used in Liquified Natural Gas (LNG) production and transportation.

Traditional pipelines are considered as part of midstream operations, moving oil and gas from one location to another. This can often be distances of thousands of miles. They are a vital link between the natural gas producing areas (including import and LNG terminals) and the population centres where most consumers are located. This can include natural gas that has been regasified from LNG. The necessary flow control involved maximises operational reliability and efficiency. The precision and control provided by actuators removes human error, increasing accuracy within an automated process. But the most important consideration for actuators on pipelines is arguably safety; critical safety duties are provided by actuators with fail-safe and Emergency Shutdown (ESD) functionality. Continued undesired flow of oil or gas can have environmental and human safety consequences but with effective shutdown options, impacts are lessened or negated.

Valves that control the flow of oil and gas can be pneumatically, hydraulically or electrically actuated. The type of actuator chosen depends on several factors, such as power sources, location, type of control required, what fluid is being controlled and frequency of operation. Fluid powered actuators are often chosen for large- scale pipeline applications due to their fail-safe capability, their high torque and thrust capacity, and because they are fast acting. Appropriate customised control systems for high pressure gas supplies are often used. Categories of fluid powered actuators include pneumatic actuators, high-pressure pneumatic actuators and electro-hydraulic actuators. Spring-return pneumatic actuators are often used on both gas and oil pipelines as they provide the simplest and most reliable way of achieving a fail-safe action. Large actuators (such as Rotork’s GP range, which can stretch up to nearly 6 m, operating valves up to 68 inches) have on-board control panels for shut-down operation. This is the safety function that makes them ideal for use on pipelines. High pressure pneumatic actuators are used on pipelines where the high-pressure gas flowing in the pipeline is used as the power source to the actuator; no pressure reduction system is required. As well as ESD and safety functions, they can also provide other control functions such as low pressure close and line break. They are ideal for remote or hazardous environments. If necessary, they can be solar powered. Electro-hydraulic actuators are another option, combining simplicity of electrical operation with precision of hydraulic control, with the reliability of a spring to perform ESD and safety functions. Rotork’s Skilmatic actuator is a self-contained solution for remote locations and is designed for safety critical applications. It can close a valve in seconds if necessary and offers partial stroke and ESD capability as standard features. In 2018, Skilmatics were installed on a tank farm in India to fulfil an increase in demand of safety related duties as required local legislation. They operate 42" and 48" triple offset butterfly valves, providing tank overfill protection.

Large, industrial pipelines that transport natural gas run through many miles of remote, challenging terrain. Here, compressed air or even electricity can be unavailable. Gas from the pipeline can sometimes be the only available motive power for the actuator. Heavy-duty actuators of this kind provide routine and safety shutdown duties for the kind of large valves found on pipelines, especially within challenging environments such as saline, coastal locations (with high possibility of corrosion) and hot, arid, desert areas that see extreme fluctuations in temperature. For example, actuators have been installed at key points on a cryogenic LNG pipeline in northern Venezuela. The pipeline transports gas and LNG between different sites. The actuators provide control of ball valves along the pipeline and provide ESD options, supplying the high level of safety, reliability and security needed at all stages of LNG production. LNG presents its own unique challenges.

To turn specifically to LNG, many challenges seen in natural gas midstream pipeline applications apply to LNG as well. The main method of LNG transportation is by tanker/sea vessel, but pipelines also play a key role both in terminals, liquefaction facilities, storage and regasification systems. Safety must always be an overriding concern for operators. The fail-safe and ESD functions offered by actuators play an essential role in safe and reliable operations, shutting off product flow in an emergency and preventing further damage. This especially applies in often hazardous and challenging environments. For example, an LNG pipeline in south-west Chile was enhanced by the installation of fluid power actuators from Rotork. The LNG complex includes a sea terminal that receives LNG from tankers and a plant for regassifying and distribution by pipelines into central Chile. Heavy-duty, pneumatic and hydraulic actuators provide safety and shutdown duties. The exposed marine environment dictated the use of corrosion resistant materials in the packaged control systems and components supplied with these actuators. An LNG site in Queensland, Australia, installed CP and GP pneumatic actuators to operate butterfly valves; they are customised with control packages for bespoke operating duties. Large gas-over-oil actuators were installed on large mainline pipeline shutdown valves. The pipelines link natural gas production wells in the middle of Queensland to an LNG production plant at Curtis Island on the coast.

Movement of LNG requires the use of valves and actuators that can withstand the extreme cold temperatures involved. In order for gas to be transformed into a liquid, −162°C is required. The valves and equipment with LNG operations therefore must be able to operate at very low temperatures to supply the safety and reliability needed at the low temperature storage, regasification to natural gas and onwards transportation midstream stages, in often hazardous and challenging environments. Cryogenic valves are usually needed. GP and CP scotch yoke actuators from Rotork have been used at LNG terminals to operate ball and butterfly cryogenic valves in storage and regasification plants. In 2020, GP actuators were installed at a South Korean LNG terminal, which holds four LNG storage tanks and a regasification plant. They were installed on the terminal’s 32-inch main pipeline and perform an open/close function, to control flow of both LNG and natural gas in its gaseous form. In an emergency, the flow can be cut off immediately by the fail-safe functionality that can be provided in either direction. GP actuators were also used on a natural gas pipeline in India. Over 80 were supplied to operate buried ball valves for ESD requirements along an 879 km pipeline from a high-capacity LNG import terminal on the south-west coast.

Electric actuators also play a role in the flow of natural gas and LNG on terminals and relevant sites. Many operations require valves to move repeatedly between set positions; electric actuators provide precise operation, with resolution and repeatability. IQ3 electric actuators were installed on a Malaysian site on 2019 that saw the construction of a regasification unit, LNG storage tanks and berths for the loading and unloading of LNG carrier vessels. The actuators now control the flow from the terminal to the carriers. CVQ electric actuators have also been installed on the LNG site in the Surat Basin, Australia. They operate ball valves on separator skids. Electric actuators are prized because of their reliability, safety and efficiency. Many offer explosionproof certification and are suitable for use in dangerous and hazardous environments.

In order for LNG to be transformed back into natural gas, a process called regasification is required. The regasification stage of LNG usually takes place at import terminals where LNG has been moved onshore. It must be returned to its gaseous state for onward transportation through traditional pipelines to be used for fuel, power generation and heating. Pneumatic scotch yoke actuators are often used, performing open/close functions for both LNG and natural gas control. Fail-safe functionality can be provided in either direction due to the spring-return module inside the actuator. Vaporisers, a key component of the regasification process, have valves that are often small and compactly arranged. They require compact and fast acting actuators to operate them. Other applications at this stage include controlling gas outlet valves, vapour discharge, tank pump discharge and unloading valves.

Both traditional large-scale pipelines (to transport natural gas across thousands of miles of land) and smaller scale pipelines for LNG production and processing require actuators. Actuators are key equipment for the control of liquids and gas, offering reliable, efficient and safe operation of the valves that sit on pipelines in a wide variety of applications across the midstream sector. Within LNG, valves are usually cryogenic and the actuators operating them must be sturdy, strong and capable of working successfully within demanding or even hazardous environments.