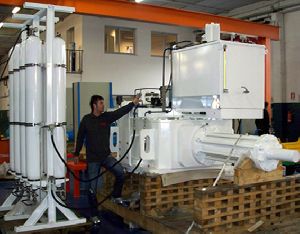 In the latest of a series of contracts for projects in the area, Rotork Fluid Systems is supplying pneumatic and electro-hydraulic valve actuators with a value in excess of one million Euros for the onshore liquefied natural gas pipework network in Angola (AnLNG).

The pipeline network consists of gas gathering and transportation systems designed to deliver gas from several offshore oilfield developments to an onshore LNG processing plant at Soyo.  Three pipelines are under construction, each consisting of an offshore, near-shore and onshore segment.

This latest contract follows several others recently awarded to Rotork Fluid Systems for the Angolan offshore oil and gas industry. At the beginning of 2009, more than 500 pneumatic actuators were ordered for the Pazflor FPSO, a mega floating production, storage and off loading vessel that will operate in Block 17 of the offshore Angola field.  Previously, orders for Rotork pneumatic actuators have included the Kizomba A and B FPSOs, which operate in the Block 15 offshore field.