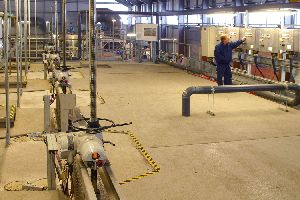 In face of severe competition from other European actuator manufacturers, Rotork has won a landmark third term framework agreement for the supply of electric valve actuators to Thames Water.

The exclusive agreement, described as “amongst the most prestigious contracts available to manufacturers such as Rotork”, runs for a minimum period of three years.  The majority of actuators involved will be IQ and IQT models, of which Thames Water now has a huge installed base. Thames was amongst the first of the UK’s water companies to embrace Rotork’s IQ ‘non-intrusive’ intelligent actuator technologies when first launched in 1993.  Rotork’s two-wire control capabilities, particularly regarding Profibus networks, were also important contributors to the Thames Water decision.

The attached photograph shows Rotork IQ actuators on the inlet penstocks at Reading Sewage Treatment Works, a new-build project recognised as one of Thames Water’s flagship sites.  Approximately 150 Profibus-enabled IQ and IQT actuators control the sequence of sewage treatment through the works, from the fully enclosed inlet screens to the tertiary filters.