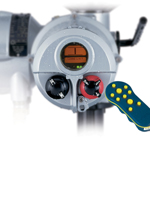 This recently commissioned four billion dollar project heralds a "new era" of crude oil supply by linking the oilfields of the Caspian Sea with the Mediterranean coast of Turkey.

The mostly forty-two inch diameter pipeline is one of the longest in the world, stretching 1774 kilometres from Azerbaijan, through Georgia to the Turkish port of Ceyhan. Built by an international consortium led by BP the pipeline is designed to carry up to 50 million tonnes of crude oil a year from the world's third largest reserve to western markets. The project is seen as vital for providing energy security and enhancing regional co-operation.

The majority of the Rotork actuators were supplied for the line valves manufactured by MSA in the Czech Republic. Rotork actuators were also ordered for the project by FMC Technologies in the USA and Consad in the Netherlands. All the actuators are explosion-proof versions of Rotork's latest IQ multi-turn and IQT quarter-turn intelligent range, featuring enhanced "non-intrusive" commissioning, interrogation and diagnostic technologies. Data loggers record historical actuator and valve activity, including valve torque profiles, which can be downloaded and analysed on a PC running Rotork's IQ-Insight software to facilitate predictive maintenance and eliminate unexpected plant failures.

Rotork's contract activities were assisted by Omas Ltd, their agent in Turkey, who co-ordinated activities between MSA and the Turkish pipeline operators, Botas Petroleum Pipeline Corporation. Omas will also provide local service and support for the installed actuators.