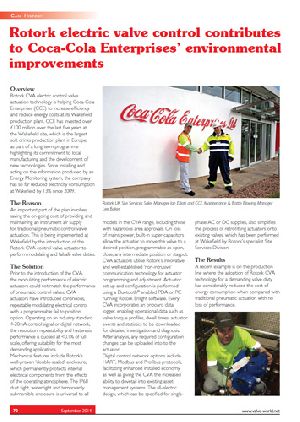 Rotork CVA electric control valve actuation technology is helping Coca-Cola Enterprises (CCE) to increase efficiency and reduce energy costs at its Wakefield production plant. CCE has invested over £100 million over the last five years at the Wakefield site, which is the largest soft drinks production plant in Europe, as part of a long term programme highlighting its commitment to local manufacturing and the development of new technologies. Since installing and acting on the information produced by an Energy Monitoring system, the company has so far reduced electricity consumption at Wakefield by 13% since 2009.